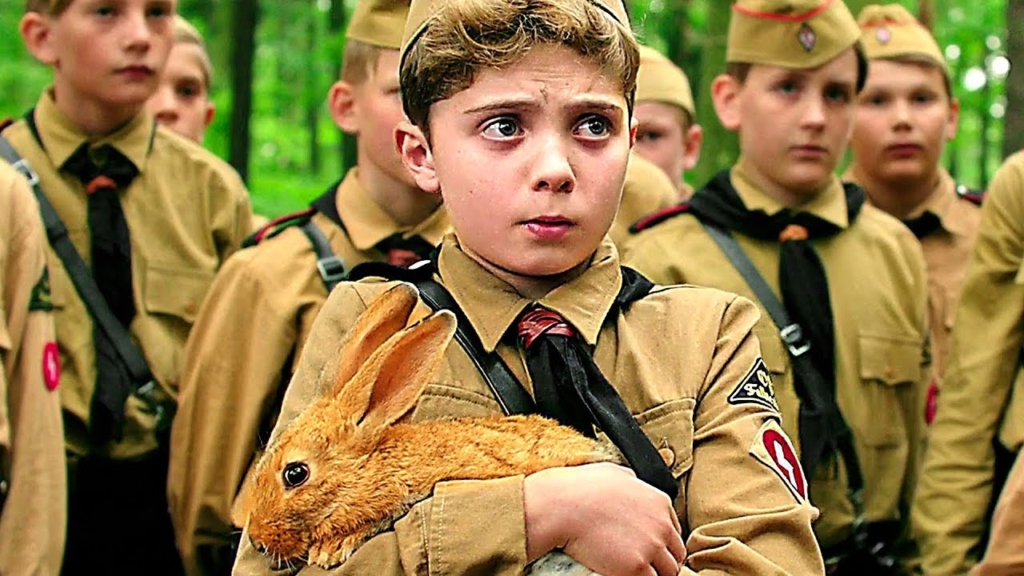 Jojo Rabbit (2019), directed by Taika Waititi, follows 10-year-old Jojo Betzler (Roman Griffin Davis) who’s growing up during World War 2. Young Jojo is thrilled to be part of the Hitler Youth along with his peers, but doesn’t quite understand what it means to be a Nazi. He’s mostly just enamored with Swastikas and the idea of being a Nazi, so much so that he even has Adolf Hitler (Taika Waititi) as his imaginary friend. It’s a childish version of Hitler who’s somewhat of a father figure to Jojo, but the fact that he’s even there shows Jojo’s dedication to the idea of being a Nazi. One of Jojo’s first tests at the Hitler Youth training camp comes when he is called on to murder a rabbit with his bare hands, and refuses. It’s at this moment that he first questions whether the Nazi life is truly for him, as he doesn’t want to harm an innocent creature. Jojo ends up leaving the training camp early due to his injuries, and is shocked to discover that his mother is hiding Elsa (Thomasin McKenzie), a Jewish girl, in their attic. There’s no safe way out of this situation for Jojo; if he tells on his mother, then she’ll get executed. Adolf pushes Jojo to maintain what seems at first glance to be a patriotic view, causing Jojo problems with his single mother Rosie (Scarlett Johansson), who is opposed to the Nazi party and the war. Over the course of the film, Jojo figures out what it really means to be a Nazi, and has to decide where he stands on WW2.

One of my favorite aspects of this film is its cinematography. It almost reminded me of a graphic novel. There were so many unique shots, for example when Jojo is rushed to the hospital after a grenade explodes at his feet. At this point it switches to a first-person perspective, showing us the world through Jojo’s eyes. Things appear blurry and dreamlike as he’s loaded into an ambulance and Adolf chases after him as he’s wheeled into the operating room on a stretcher. The cinematographer is Mihai Mălaimare Jr., who revealed in a Deadline interview that the distinctive camera shots were inspired by the film taking place in the world of a 10-year-old boy. Mălaimare recalls, “most of the time, [Waititi and I] talked about the fact that it’s really interesting to just go lower, and look [at] how the world or the set looks from Jojo’s height.”

My only issue with this film was that there wasn’t a lot of context for Jojo’s family situation. We know that he lives with his single mother, but it’s not explicitly mentioned where his father went. I didn’t know whether he was dead, supporting the war effort, or something else. It is also revealed that Jojo had an older sister, Inge, who died shortly before the events of the film, and Elsa pretends to be her when the Gestapo show up so that she doesn’t get taken away. However, we aren’t told a whole lot about the relationship that Jojo had with his sister, and we only see pictures of her. I realize that the lack of context about Jojo’s family was most likely intentional, but I was still a little confused at times.

Other than this, I found Jojo Rabbit to be a beautiful film that was quirky and creative! It’s sweet and funny at times, but also emotional. The relationship that formed between Elsa and Jojo was sweet, and I got a kick out of the fictionalized version of Hitler that lived inside Jojo’s imagination, eating unicorn meat and cheering for Jojo. It was also sad, because as the film progresses, Jojo is seen to realize what it really means to be a Nazi, and that it’s not all swastikas and “Heil Hitlers”. We witness him grow up and start to think for himself, with this epiphany being signified at the end when Jojo says to Hitler, “Fuck off, Hitler” and kicks him out of his bedroom window.