by Emily Nagle Let’s-a go! The first trailer for Illumination’s long-anticipated Super Mario movie is finally ready to premiere. It will make its debut to the attendees of New York Comic Con on October 6, 2022. Illumination’s untitled Mario film was announced back in 2018, and confirmed to be co-produced by Nintendo’s representative director Shigeru […] 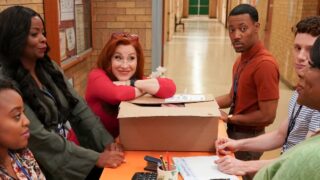 by Emily Nagle After a long summer, “Abbott Elementary” is back in session. The sophomore season of ABC’s mockumentary-style workplace comedy following an underfunded public school in Philadelphia premiered tonight at 9PM EST, and was watched by thousands of excited Twitter users who live-tweeted the episode under the hashtag #AbbottElementary. The show’s official Twitter account […]

by Emily Nagle While the past couple of weeks were relatively quiet for movie theaters across the United States, this past weekend saw plenty of new releases across lots of different genres. From creative documentaries to comedic murder mysteries, this weekend offered up something for viewers with lots of different tastes. Top 5 Highest Grossing […]

by Emily Nagle “Fakes” is just one of the new Netflix originals that rolled out this month. This Canadian teen drama follows Becca and Zoe, two best friends who accidentally build one of the biggest fake ID empires in North America. After anxious, studious Zoe (Emilija Baranac) prints a fake student card so she can […]

by Emily Nagle Happy National Video Games Day from Don’t Tell Netflix! This day celebrates all things video games, from the history of it and how far they’ve come to celebrating video games as an activity, and how they can be relaxing and fun as well as bringing people together. Gaming is one of the […]