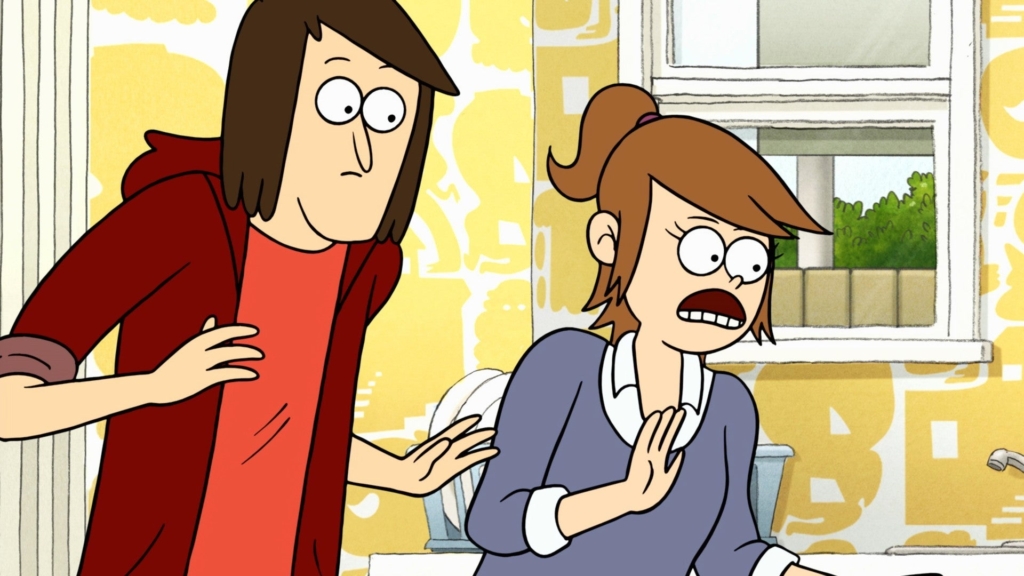 I’ll start with a little background about the show. Close Enough is an adult animated sitcom created by J.G. Quintel (who’s best known for creating the Cartoon Network series Regular Show). It follows Josh and Emily, a couple in their early thirties, who are living in an apartment in Los Angeles with their six-year-old daughter Candice, along with their divorced friends Alex and Bridgette. Much like Regular Show, all of the episodes revolve around a small problem that eventually turns into a surreal, sci-fi-style adventure of large proportions. Like Josh joining a gym so he can be strong enough to pick up Candice, but it actually turns out to be an addictive cult.

The series premiered on HBO Max in July 2020, and got renewed for a second season less than a month later, which arrived on the platform on February 25, 2021. Two weeks prior, the series got renewed for a third season. It’s been met with mostly positive reviews by users on Rotten Tomatoes, IMDb, and IGN.

While it has a lot in common with Regular Show, Close Enough is for a slightly older target audience, skewing more towards Millennials than kids and teens as we watch the couple and their best friends/roommates transition from their 20s to their 30s. Like that awkward time period between spontaneous college life and settling down to start a family or career.

With that being said, let’s dive into season 2. With the last season setting up the cast of characters and getting us used to their personalities and quirks, I found this new season to be a little different. There were episodes focusing on the other characters in the show besides Josh and Emily, which I liked a lot. I got to see more of the other occupants of the duplex, including their landlord Pearle and her adopted son Randy.

One of my favorite episodes from Season 2 was “Cyber Matrix,” one of the two segments of episode 3. This segment focused on Alex’s refusal to get a smartphone, as he believed that it would become addictive. Sure enough, the quirky, washed-up community college professor ends up switching to a smartphone after his old phone breaks (with the selling point for him being that it has a calculator feature). When the virtual assistant ends up seducing Alex into a smartphone addiction so intense he’s literally connected to the phone, it’s up to Josh to connect to him via VR headset and bring him back to reality.

Josh and Emily’s daughter got her own episode as well, titled “Sauceface.” This was also one of my favorite episodes of the season, featuring the six-year-old starting an illegal hot sauce ring after the school cafeteria bans it so she and her friend can buy a drone.

I’m really liking Close Enough so far, and find it to be a super creative, funny show about growing up and becoming an adult. As someone who grew up watching Regular Show, this show almost feels like a spin-off (Quintel even confirmed that it takes place in the same universe), and it’s almost like this is what Regular Show grew up to become. It has that same witty, quick humor, and I love how it turns mundane, everyday situations into wild fantasy situations. I’m excited to see where this show goes in the future!