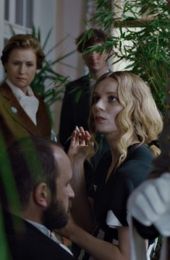 Baltic Sea, 1928. Levushka, a penniless Russian factory worker discovers the virtues of idleness as a non-professional actor on set of an Eisenstein film. Unfortunately, he plays the wrong guy and has to flee the Soviet Union. He then wants to try his luck in Hollywood.

Disguised as an aristocrat, he waits for the next ship to New York in a vampire-infested German port-town, where he meets the young factory owner Octavia Flambow Jansen, who spends the summer by the sea with her personal assistant Jakob. Intrigued by the curious refugee, she offers him shelter in her luxurious mansion. The fake aristocrat quickly blows his cover, but falls in love with the flamboyant millionaire even quicker much to the annoyance of the somewhat clumsy Jacob, who not only has secret literary ambitions, but also secret feelings for his employer. As Octavia likes persecuted actors even better than persecuted noblemen, she finances the shooting of a vampire film in order to recommend Levushka to the studio bosses.

Even a kissing scene between the two is planned! Levushka's fantasies of love (or of socia ascent?) might take shape were it not for the pitfalls of class relations, an unexpected competitor, a lynch mob out for bloodsuckers, and the annoying fact that Octavia herself is a vampire...